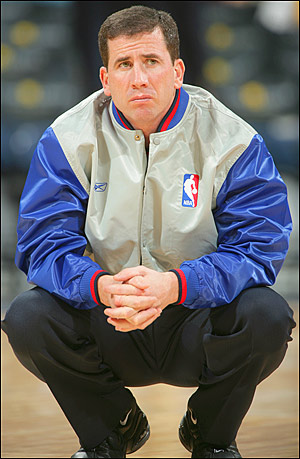 Tim Donaghy may not have been the only NBA referee betting and potentially fixing the outcome of games. News has surfaced that Donaghy is prepared to implicate 20 refs in a growing NBA gambling crisis.

The report on 1050 ESPN Radio in New York said Donaghy will provide prosecutors as many as 20 names of other NBA officials and will detail their involvement in some form of gambling, believed to include betting in casinos.

The offenses may not include criminal activity, according to the report, but could violate NBA policy and lead to firings that would decimate the officiating staff. Twenty referees would make up about a third of the leagueâ€™s roster.

Meanwhile, the referees union maintained that Donaghy is the only NBA referee known to have engaged in gambling activities.

On August 15, Donaghy appeared in a Brooklyn federal court and pleaded guilty to conspiracy to engage in wire fraud and transmitting wagering information through interstate commerce.

END_OF_DOCUMENT_TOKEN_TO_BE_REPLACED 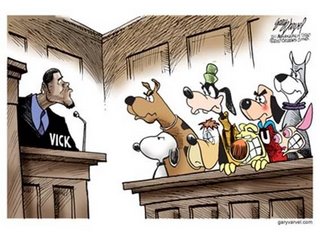 NEW YORKâ€“Michael Vick is almost surely going to jail and his football career is probably over. All the years he spent as a pampered celebrity in the general vicinity of education did not provide him with the insight that torturing dogs is not good and, besides that, could get him in trouble.

The plea bargain he struck with federal prosecutors in Richmond, Va., yesterday gives no real suggestion that he knows right from wrong. He does know that his former friends turned on him for the prosecutors, and that he is in big trouble, which is a start. Read the Rest of the Story

A landlord from the UK and a multi-millionaire entrepreneur in the US are leading the charge against smoking bans on both sides of the Atlantic. Les Fuller, landlord at the Seven Stars in Bury, ended his tenancy after claiming the smoking ban would cost him thousands of pounds in lost revenue, while in the US Donald Trump has written a two-page letter to Atlantic City mayor Bob Levy and city council president William Marsh, suggesting that gamblers are fleeing casinos for states that donâ€™t curtail smoking.

A survey of 100 private equity executives by accountancy and consulting firm Grant Thornton found that 28 percent would not consider gambling businesses as an investment possibility. Despite one in four private equity firms having a formal code of ethics, the gambling sector was only ranked third behind pornography and firearms/military as the least popular areas to invest in.

Gamblers at the Twin River casino in Rhode Island were given more than they bargained for after a video lottery terminal awarded credit for twice as much money as had been inserted and erroneously paid out $450,115 over two months. A spokesman for the machineâ€™s supplier said the machine’s money-doubling feature was turned on, apparently by accident.

This event will run for ten days online only, with prize pools that run from $100k to $1m. Each victor will get a ECOOP Bracelet, just like the winners of the World Series of Poker events in Las Vegas get WSOP bracelets. The online action of the ECOOP gets underway at VC Poker on November 30.

With the success of Full Tilt Pokers FTOPS and The Pokerstars WCOOP it was only a matter of time before a European Championship was born.

END_OF_DOCUMENT_TOKEN_TO_BE_REPLACED

Alderney and Isle of Man are in; everyone else is out. If you own an Internet gambling website outside of these jurisdictions and Great Britain proper, you can no longer advertise the gambling site in the UK beginning September 1.

Around one thousand gambling websites face being banned from advertising in the UK following a government crackdown.