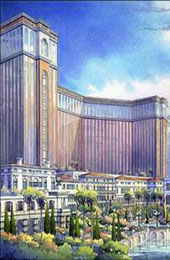 Billionaire Sheldon Adelson’s biggest gamble makes its debut today when his $US2.4 billion Venetian Macau, the world’s biggest casino, hotel and resort in the southern Chinese enclave of Macau, opens its doors.

The Casino is the worlds second largest building which will hold the world’s biggest casino with 850 gaming tables and 4100 poker machines, a 3000-suite (not room) hotel, a 350-store shopping complex and a sports stadium that will hold 15,000 people.

The project aims to create a critical mass that will transform what has been a Chinese gaming city dominated by day trippers into a much broader draw card, with conventions, trade shows and big-ticket entertainment.

To imagine the size of the Venetian, imagine a building large enough to store 90 Boeing 747s.

The Venetian makes even the Sands Macau seem small and, certainly, its scale easily dwarfs recent casino openings by US rival Steve Wynn and the Melco/PBL Crown casino.

The Venetian will have 111,000 square metres of convention space â€” double that of neighbouring Hong Kong â€” and its own permanent Cirque de Soleil show and dedicated theatre.

Much like The Venetian in Las Vegas, the complex comes complete with lagoons and canals and singing gondoliers but on a much larger scale.

It will eventually have its own ferry terminus to bring visitors from Hong Kong because the existing ferry terminal is already at capacity. Adelson is also planning his own flights to and from the underutilised international airport, to bring in guests from Japan, Taiwan, Thailand, Korea, Indonesia and Singapore.

The Venetian has hired 15,000 people, or 5 per cent of the city’s workforce, to make sure guests want to return.