Microgaming has been extremely good at keeping on top of the slot machine development business this year. Last month the hot plate was ‘The Lord of Rings’ slot machine, but the company has now announced four new topics for slot machines to be released this October.

END_OF_DOCUMENT_TOKEN_TO_BE_REPLACED

Professional poker player Sorel Mizzi emerged victorious at the Borgata East Coast Championship to make the most successful year of his career even better.

The event was a $7,200 + $300 and it only drew 62 players to the Borgata Hotel & Casino in Atlantic City. Mizzi outplayed the field and cashed for

END_OF_DOCUMENT_TOKEN_TO_BE_REPLACED

ATLANTIC CITY, New Jersey: A burst of new, luxurious mega-casino projects to be built by 2012 will transform the face of Atlantic City into a more futuristic â€” and crowded â€” gambling resort.

At least four companies are betting a combined $9 billion (â‚¬6.1 billion) that the makeover will help Atlantic City catch up with Las Vegas as a place to come â€” and stay â€” for more than just gambling.

Revel Entertainment Group unveiled drawings of its new $2 billion (â‚¬1.37 billion) casino-resort, to be called simply “Revel.” Due to open in the second half of 2010, at 710 feet, it will be the tallest building in Atlantic City â€” at least for a while.

END_OF_DOCUMENT_TOKEN_TO_BE_REPLACED 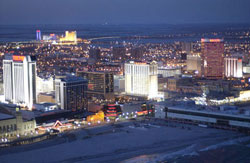 Saturday is the deadline for Atlantic City casinos to say how they’ll comply with a law that requires gambling floors to be at least 75 percent smoke free.

At least five casinos will go totally smoke free in their gambling areas.

This comes at a bad time for Atlantic City casinos’ that are already struggling this year, dropping revenue by nearly 6 percent from a year ago.

The latest numbers continued a downward trend this year in Atlantic City that has seen the amount of money casinos won from gamblers increase in just one of eight months so far.

The decline is due to a variety of factors, including newly opened slots parlors in Pennsylvania and Delaware, and a partial smoking ban in Atlantic City’s 11 casinos.