Gambling is considered illegal in Dubai, yet Dubai’s state owned investment company, Dubai World, bought a piece of Las Vegas on Wednesday, announcing an investment of US$5 billion in MGM Mirage. 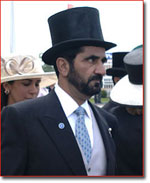 Dubai World, the state-owned investment firm in this fast-growing Persian Gulf emirate, will pay US$2.7 billion to acquire a 50 percent stake in CityCenter, a 76-acre urban metropolis with upscale hotels, condos and retail to open by 2009.

The transaction also includes up to $2.4 billion in stock purchases, giving Dubai World an approximately 10 percent interest in MGM. Some of the shares will be purchased through an $84-a-share tender offer, a 13 percent premium to Tuesday’s closing price of $74.32.

“The announcement today brings together two companies known for creating landmark developments that have the ability to change the face of luxury living and tourism,” said Sultan Ahmed bin Sulayem, Chairman of Dubai World.

“Our vision is to create a global portfolio of signature properties that will create value for generations to come,” Bin Sulayem said.

Dubai World became known inthe US when its subsidiary, Dubai Ports World, was forced to sell its U.S. port operations over security concerns in the United States last year.