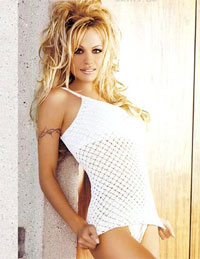 The Buzz in Las Vegas is that Pamela Anderson is planning to open up her own branded casino on the Las Vegas strip. The rumor is that the new casino will be named Planet Pammie.

The news of her planning a new casino simply comes from a friend who wishes to not be identified. That source says, “Pammie is interested in several different ventures and is currently leaning towards a themed venue – possibly a casino.”

Pamela Anderson is currently in Las Vegas working as a magician assistant to Hans Klok who runs a magic show on the strip. It was reported earlier this month that the former Baywatch babe was dating Hans.

Pamela is having a panoramic condo suite built in Las Vegas and has extended her contract with Hans to go through December.

Back at the 2006 World series of Poker, Ms Anderson launched her short lived Online Poker site. No word yet on where or not she has the same financial backers for this project if it does indeed turn out to be more than a rumor.