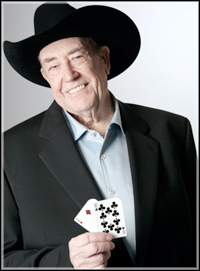 On Sunday we got to see the first episode of the World Series of Poker Europe Main Event broadcast on ESPN. The action was intense as it involved a great hand between Ian Munns and Viktor Blom (who many think is Isildur1).

This may sound speculative, but I think the average poker player would have backed down but Blom (or as I am speculating, Isildur1) decided to take the chance and pushed all-in for 236,000 total. Unofrunately, Munns called with A 7 and Blom was out.

However, this was not the only interesting piece of action during the episode, we also witnessed an intense dispute between two titans of poker: Phil Hellmuth, the poker player who has 11 WSOP bracelets, and Doyle Brunson, the greatest poker legend up to date.

During the dispute, Brunson harshly criticized Hellmuth’s entry into the event. Hellmuth repeated the same entry he did at the WSOP last year ans showed up with a bunch of slave girls, centaurions and he was dressed as Caesar – yes, he even wore the laurel. Doyle was not impressed by this as we can see below:

Brunson: Tell me the truth, are you embarrassed at all?

Hellmuth: Not at all.

Brunson: Not at all? I’m embarrassed for you.

Hellmuth: Doyle, I thought you of all people would be proud of it, knowing that it’s putting money in your pocket.

Brunson: Making a circus out of a poker game?

Hellmuth: Are you kidding me? I add a little drama, a little theatre to the game.

Hellmuth: I’ll ask you one quick question. Do you think it’s bad for poker when I show up like that?

I cannot wait for the next episode!